Club Person of The Year

Presentation of the 2019 Golden Boot Shield Northbridge FC U12 – U18 mixed and girls award.

In the inaugural year Jesse, from the 2019 U14B team, scored 37 goals in the 19 games he played and also a hattrick when he played up a year for the U15B’s. Jesse’s goals helped the U14B team to the Divisional title and Grand Final victory.

This Shield has been very kindly donated anonymously. Finally we have been able to present the shield to Jesse in front of his parents, Kuniko and Danny and team members. Long time standing committee member Brian Norton presented Jesse with the shield before their game on the 19th July 2020.

The Max Meyer Award is an annual award that will be presented to the highest goal scorer each season for the U12 to U18 mixed and girls age groups. 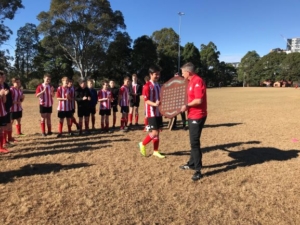 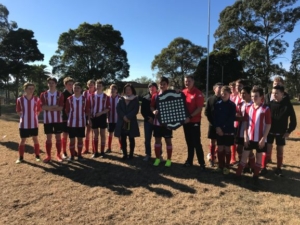 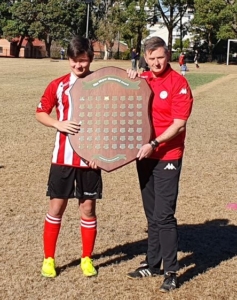 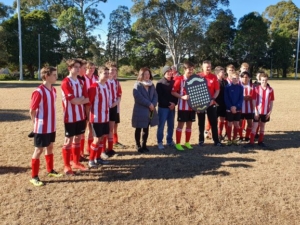 Club Person of The Year

Clubman of The Year.

Clubman of the Year Award presented to:

Lee Sullivan Main Committee Member for over [8] years including acting as Club Secretary. Lee plays in our over 45s and is now a Board Director of the Northern Suburbs Football Association

Mark Nicholaeff . Main Committee Member for over [8] years who undertook many roles within the club including acting as Treasurer and working very closely with Football NSW in setting new youth development guidelines

Sonia Hebenstreit . Main Committee Member for over [8] years undertaking various roles within the club but most recently acted as the financial controller of the club. “
[/av_toggle]
[av_toggle title=’2015′ tags=” av_uid=’av-wcwe’ custom_id=”]
Awards Clubman of the Year. 2014 – Martin Dickey 2015 – Michael Hunter

Northbridge FC Team of the Year. Female Women’s All Age NSFA Division One. First Northbridge team, male or female to win a Division One NSFA All Age Competition.