The NFC  Academy teams play in the NSFA Development Leagues (NSFA SAP League, Super League and Diamond League) and the program is the player pathway to the Northbridge FC Bulls NPL program playing in the Football NSW NPL and SAP/GSAP competitions.

All teams train twice a week during the pre-season and through the winter season (Feb to August).

All teams train twice a week during the pre-season and through the winter season (Feb to August).

2022 Selections are nearly complete for our Academy and DS Program, but we still invite players to complete this Expression of Interest Form to be considered for our 2022 Academy & DS Program, as there are limited spots available in some age groups.

Queries to Matilde Johns at academy@northbridgefc.com.au

Northbridge runs a strong All Age program, fielding teams in both the NSFA Men’s and Women’s All Age Premier Leagues.

Enquiries to our MAA/PL and WAA/PL Coordinators at the emails below. 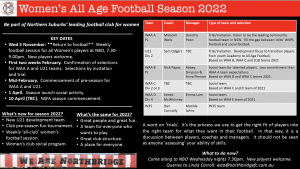